Blog post by Tammi Truax, freelance writer and Barn Dinner guest.  Thanks to all the volunteers, chefs, farmers, guests, and community members who made the 2010 Heirloom Harvest Barn Dinner such a success! 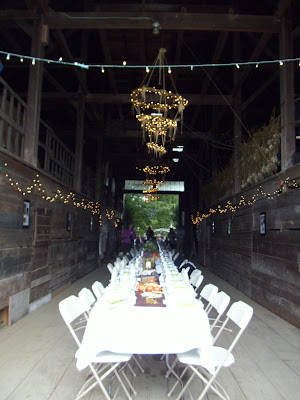 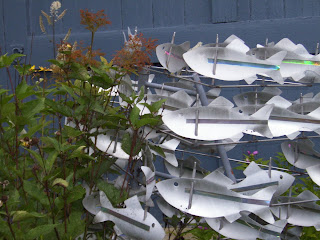 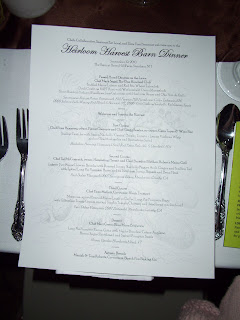 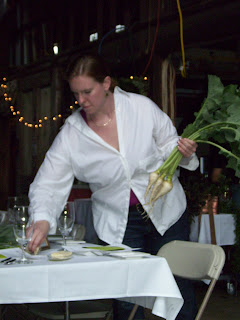 Last night I had one of the most memorable meals I have ever had the pleasure of partaking in. I was one of the lucky souls seated at the table seen above for the second annual Heirloom Harvest Barn Dinner at Berry Hill Farm in  quintessentially scenic Stratham, New Hampshire. The dinner was the inspired dream of chef and restaurateur Evan Mallet of the Black Trumpet, who shoulders a deep personal and professional commitment to the noble idea of renewing America’s food traditions. He is very active in RAFT New England Grow-Out, the Slow Food movement, and Chefs Collaborative. He is in the center of his team in the barn’s prep area in the picture below. 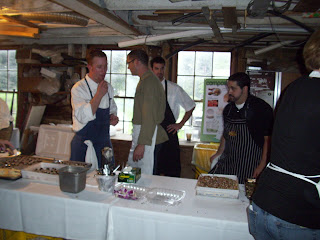 This year the grow-out vegetables, which are all heirloom (meaning they are both indigenous and endangered) were an interesting variety of eleven fruits, vegetables, and beans most of which have never graced the lips of this life-long veggie lovin’ native. We were reminded that there was a time not long ago when the people of this region ate only what was fresh, local and organic. Most of the groceries came from the yard. And we were reminded in dish after creative dish, that they ate well. It is sad to realize, but I am thankful for the lesson, that these heirloom foods, and many others, will be lost to all of us forever, if we don’t start growing, eating, and ordering them with some serious frequency. Chef Evan shared this year’s featured heirlooms with a team of gifted cooks to create a menu fit for a kingdom. 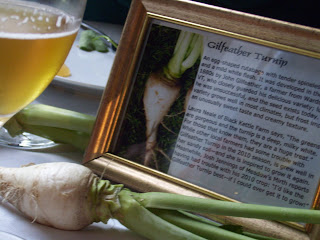 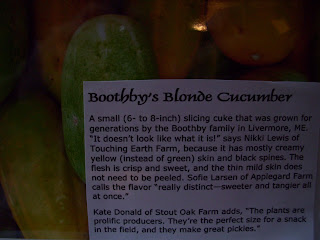 Upon arrival we had drinks (all relatively local) and hors d’oeuvres on the lawn. There were three kinds of treats being passed by pretty people; truffled Maine lobster and red fife wheat tabbouleh, slow-roasted pork and Forellenschuss (an heirloom lettuce) galantine with heirloom Marfax Beans and Red Cranberry Beans and Oka Melon pico de gallo, and duck confit on RAFT rosti of Gilfeather Turnips and Boston Marrow Squash with Wethersfield Onion marmalade. The last one, I must confess, was my runaway favorite. Rosti, the national dish of Switzerland, is pan fried grated potato. With the delightful duck confit and slightly sweet marmalade on top, it melted in my mouth like a classic comfort food cloud. I had two! 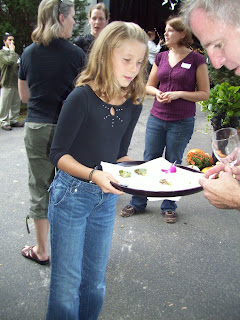 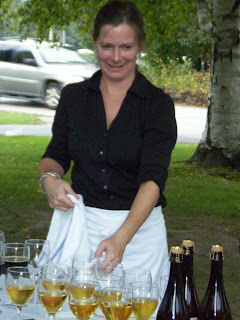 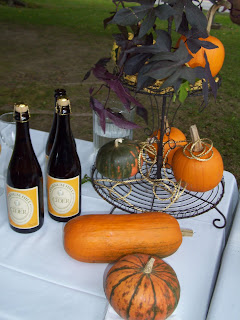 The first course was my least favorite, but only because I am not a fan of ceviche. It was sea scallop ceviche with Jimmy Nardello Sweet Italian Pepper“Caviar”, Trophy Tomato – lemon verbana whip and an Oka Muskmelon and nasturtium salad. Ceviche is a raw dish of ancient origin using primarily citrus marinades to prepare the fish. One must enjoy the texture and temperature. I didn’t, but all of my neighboring diners did. Side dishes, as shown, are used to complement. The clever “caviar” was actually created from the heirloom sweet Italian frying pepper, and played tasty tricks on the eye and tongue. The muskmelon, originally bred by Quebecian monks, was sweet and satisfying, my highlight. This dish was paired with a micro-brewed pale ale, and as you can see was plated in the most pleasing way. 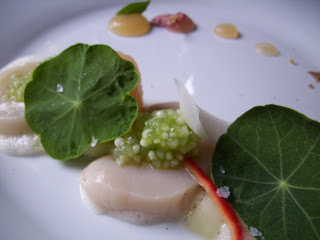 The second course was simply superb, both in taste and in presentation. We were served lobster two ways; claw en brioche with roasted Jimmy Nardello pepper aioli,  and ginger and scallion tail with spiced long pie pumpkin puree, with an heirloom Boston marrow squash, Gilfeather turnip, and bean hash between them. Both were so satisfying but the claw, which tasted like a little lobster BLT, was outstanding to me. The tail went surprisingly well with pumpkin puree, and it all paired perfectly with a smooth sauvignon blanc. 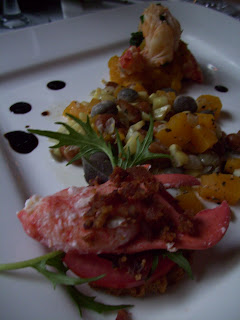 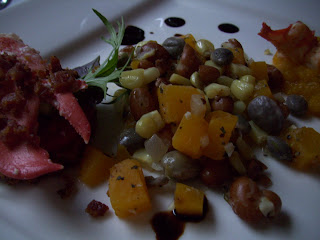 The third course was prepared by top-gun Chef Evan, and consisted of a generous portion of Moroccan-spiced braised lamb (two different cuts) ingrilled long pie pumpkin rings with Gilfeather turnip greens, with curried trophy tomato chutney and adried bean cracker bread. The meat was lovingly prepared, so moist and tender no knife was needed. The veggies were intriguing, but the chutney was a show stealer. I kept dipping my cracker bread into it. All went well with my favorite beverage; (excepting the robust porter I had sampled earlier) a light zinfandel. 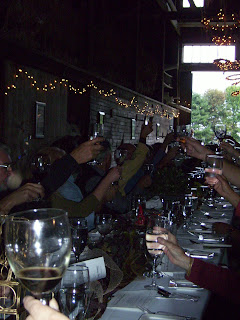 Though I was pretty full by the fouth course and generally don’t indulge in dessert, there was no way I was passing on the final course; long pie pumpkin panna cotta with maple bourbon creme anglaise, topped with a brown sugar shortbread and spicedpumpkin seeds. Panna cotta, which means cooked cream in Italian, seemed to me, the perfect way to use a pumpkin, and a perfectly heavenly way to end such a paradisiacal  meal. 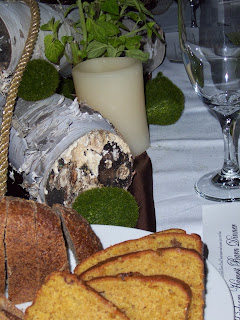 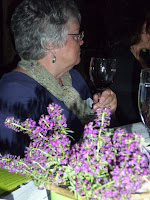 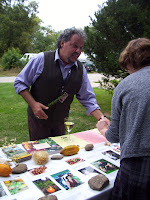 This post comes from the blog of Tammi Truax, “Teach a Man to Fish.” Original post here: http://t2fish.blogspot.com/2010/09/heirloom-harvest-barn-dinner.html

About the Author: Poster Person